Okay so, recent times have been quite packed with bad news, so I’m going to have to be more specific. But you must brace yourselves. It was a devastating one.

“Oh why did you have to bring THAT up again?! I was doing so well in therapy!”

Except that it didn’t.

It turns out that no one actually said it was closing (though the studio will be taking a break of some sort, and there is some uncertainty surrounding the studio’s future). The original report was just poorly translated and everyone ran with it because fact-checking is for suckers, ammirite?!

Regardless, for a brief period there, it seemed very plausible to me that this powerhouse of creativity and wonder was calling it quits. It was a dark time with a lot of sad feelings, but it also made me reflect on all the thrilling, beautiful, heartbreaking moments that the studio had provided over the years.

Which all sounds like a pretty good reason to revisit some of those moments, don’t you think? …

Miyazaki’s second feature film is a true epic that introduced many of the elements we’d see recur in his later works. One of those elements is kick-ass creatures. Seeing the God Warrior rise from its slumber and take out a few hundred Ohmus (giant bug-like critters) is breath-taking. It’s also quite frightening, seeing as by this point in the movie we know that the Ohmus are harmless and that the God Warriors are man-made weapons capable of bringing about the end of everything.

“Wake up, you big sleepyhead! We have a busy day of death and destruction ahead of us.”

While waiting at a bus stop for their father, two little girls are joined by the giant forest spirit, Totoro. He waits with the girls like it’s no big deal, borrows their umbrella, calls the Catbus (part-cat, part-bus, all party) and hitches a ride off to wherever. The girls are left stunned. It’s a simple scene but it’s just the right mix of odd and adorable. 25 years on, the three characters waiting at the bus stop is one of the most recognisable images from all of Ghibli’s films.

Satsuki could no longer hide the fact that she’d been overfeeding her pet cat.

Grave of the Fireflies isn’t one of those movies. In fact, it’s one of the most depressing, soul-destroying films ever made. In this scene, a young girl is so delirious with hunger that she starts to imagine the small rocks she finds are rice balls. Needless to say, the rocks don’t hold a lot of nutritional value, and she dies shortly after. So yeah, it’s a downer. But it’s such a powerful scene that it actually brought me to tears.

Porco (a fighter pilot with a face of a pig – for reasons never fully explained) tells a story of how he once passed out during a long dogfight only to wake up above the clouds. He then watched helplessly as the spirits of his comrades rose up to join an endless procession of fallen planes and pilots high above. It’s a rare moment of melancholy in an otherwise rather manic film, and it made a deep impression on me.

“Wait! You never gave back the $50 you borrowed! … At least throw me down your wallet!”

A young warrior is taken to a sacred area of the forest in the hopes that it will heal a bullet wound in his chest. There we see the Nightwalker – the giant luminescent form of the Forest Spirit – arrive and shrink down to it’s daytime form (a many-antlered deer with a humanoid face). It makes its way to the warrior, leaving new plants growing with every footstep, and heals him with one touch. It’s a quiet, surreal moment – full of imagination and just a little bit creepy.

“If I lose my job as a Forest Spirit, at least I can always get some work as a hat stand.”

Speaking of spirits arriving, in this scene our young heroine, Chihiro, finds herself transported into the hidden world of the spirits as darkness falls in an abandoned theme park. We see ghostly figures materialise all around her, and a boatload of masked phantoms docking on a nearby shore that was just a tiny stream only moments before. Chihiro reacts in the way that you’d expect – by freaking out entirely – especially when she finds that her parents have been transformed into pigs that no longer recognise her. This was my introduction to the magical, surreal side of Ghibli’s films, and I couldn’t think of a better place to start.

A boatload of vaguely “ethnic” figures landing on shore? … Man, Tony Abbott must HATE this movie!

Every scene with No Face is captivating, but I particularly love this mad moment where Chihiro feeds him some of the “medicine” she receives earlier in the film. The medicine fixes the bloated, corrupted No Face quick-smart, but as they say, sometimes “the cure is worse than the disease”. He begins to shrink and disintegrate while throwing up the contents of his belly – including the workers that he greedily swallowed beforehand. Feeling tricked, he chases Chihiro through the bathhouse where she works, causing major damage. She eventually leads him outside, where the influence of the bathhouse disappears and he returns to his quiet former self. Then, in a bizarre but beautifully bold act of forgiveness, Chihiro quickly accepts him as a travel buddy. 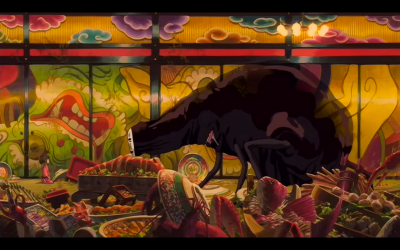 “Hmm. Pink, huh? Must be strawberry flavour … But I told them I only want spearmint humans!”

This scene has it all. It’s funny (the ridiculousness of Howl calling upon the spirits of darkness every time a girl dumps him), it’s touching (Sophie’s outburst that she has never felt beautiful), and it’s spooky (the stretching shadows and ooze pouring from Howl’s catatonic body). And after all that drama, Sophie just matter-of-factly states that Howl is simply throwing a tantrum, and gets straight down to the business of getting him cleaned up. She is able to care for Howl while letting him know that she won’t stand for his immaturity and selfishness.

“Look, guy, us Spirits of Darkness are kind of busy. Just how long is this moping going to take?”

This moment sees Sophie, who fears that Howl is dead, transported into Howl’s childhood. There she witnesses a defining moment in his life when he caught and ate a falling star (I’m sure it seemed like a good idea at the time). It’s a gorgeous bit of animation and it reveals a lot about what the deal is with the troubled wizard. It also helps that the scene features a lot of Heen – one of the cutest cartoon dogs ever.

People often assume that Miyazaki used a lot of artistic licence in his depiction of a star. But not so. Howl is just several light-years tall.

Tsunami’s are kind of a serious business, especially in Japan. Which is all the more reason why this moment, where an escaped fish-girl unknowingly brings destruction to a small island town, is impressive – tsunamis have never been so much fun. Seeing Ponyo shoot out of an underwater house riding a wave of giant golden fish is fantastic, but the best part is when Sosuke (the little boy in the story) looks out into the deadly waves bearing down on him and sees Ponyo sprinting along on the back of a fish. The expression on her face is priceless. She has no idea the damage she is causing. She’s just really psyched to be seeing her friend again.

Well that’s 10. So although there are many other great moments, I’ll stop there.

I hope to see many more years of quality output from Ghibli, even now that Hayao Miyazaki has retired. But if not, myself and my inner child will be forever grateful for the work they’ve done.

Ghibli has a number of projects yet to be released in places like USA and Australia, including the documentary, The Kingdom of Dreams and Madness. So keep an eye out for those! In the meantime I’d love to hear about your own favourite moments in the comments, or please check out my previous Ghibli post.