Hey there! I like movies and I like giving strangers my opinion on things. So I’ve combined the two by compiling this list of my favourite movies of 2014.

Oh, and I’ve also invited D.A. (Devil’s Advocate) along … though I’m not sure why I keep doing so. The guy is a bit of a downer.

(NOTE: This list is based on AUSTRALIAN release dates)

“You didn’t tell me this event was semi-formal. They’re going to think I’m a right ninny!”

You’ve gotta hand it to the people behind the X-Men franchise. They’ve made 7 films now – all based on the same concept and characters – yet they manage to keep churning out the goods. They would have had a practically perfect track record if it wasn’t for X3:Everyone Dies, X4: Just Wolverine and X6: Even Wolverinier (okay, that’s actually a lot of exceptions). But getting back to Days of Future Past, I’ll admit that it didn’t stay with me very long after the credits started rolling and I felt like the ending was a bit of a cheat, but it sure was a fun ride while it lasted. Plus you got to see Professor X say the f-word.

Movie-length advertisements for toys aren’t supposed to be any good. Sure, the first Transformers reboot was okay, and we could argue about whether Star Wars fits the description of a toy ad – but for every one of those grey area examples there are a dozen abominations like Battleship, Bratz, GI Joe, Garbage Pail Kids and The Barbie Diaries. Which is what made The Lego Movie such a surprise. It’s unashamedly full of product placement yet it’s also a really solid film. It’s funny, imaginative, and even has a few unexpected tricks up it’s sleeve that it pulls out near the end.

I find it easy to get behind any film that is critical of the news, so my enjoyment of this may come from a place of personal bias. But there’s more to it. As a critique on modern society it goes much deeper than just an attack on the 24-hour news cycle, and the atmosphere and tension make it gripping viewing – even for those who are allergic to preachiness.

DA Says: I might have been able to endure two hours with such an unlikable character if the film had an ounce of subtlety. 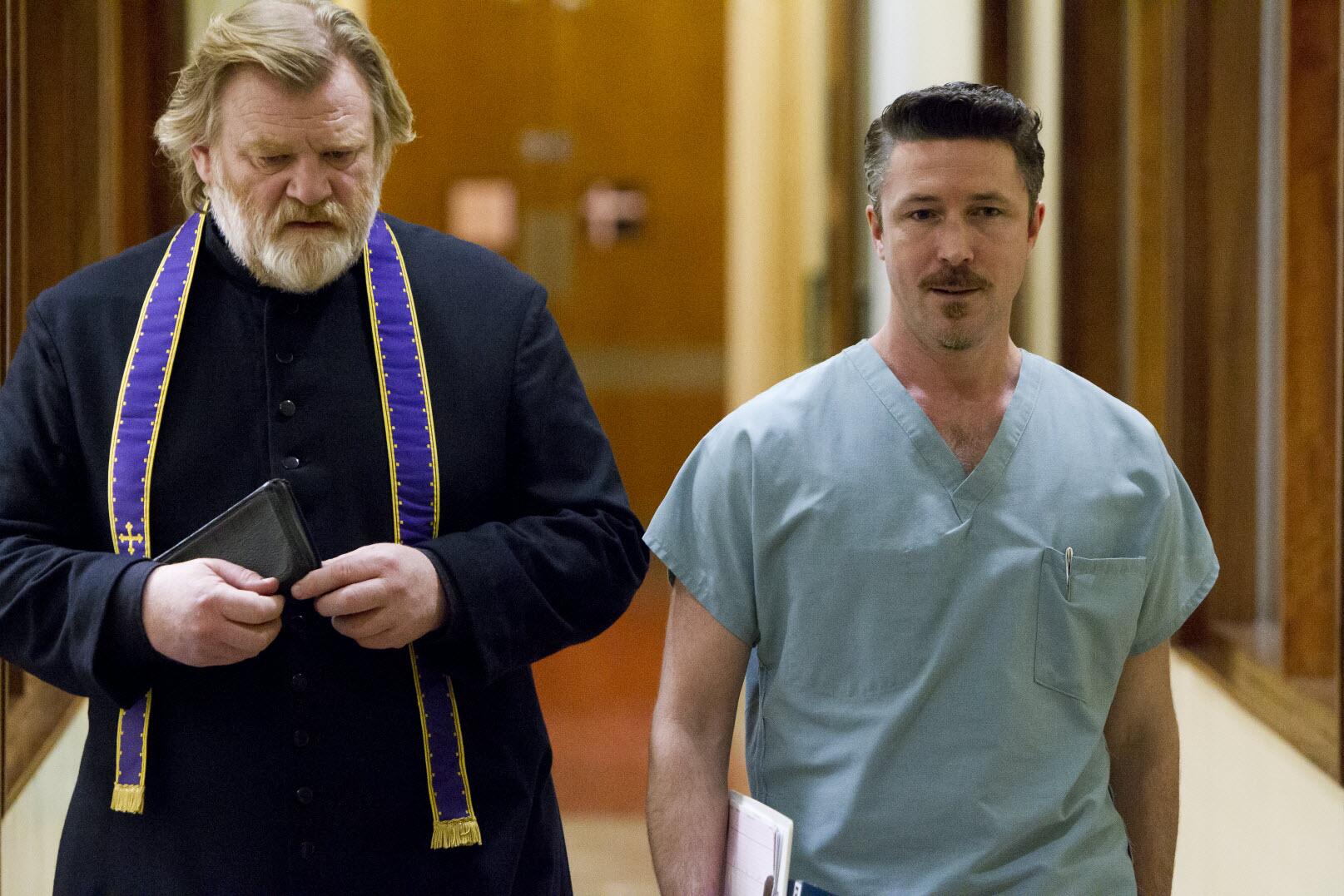 Despite The Guard being pretty fantastic, I initially thought of director John Michael McDonagh as the less-talented brother of Martin McDonagh (director of In Bruges). But now that he’s added Calvary to his filmography, I’m ready to take him seriously – which is for the best because it’s quite a serious movie. The humour is still there but it’s as black as humanly possible, and there are as many moments of gut-wrenching pathos as there are laughs to be had.

6. Guardians of the Galaxy

“You realise you’re supposed to put the TALL guy in the middle for group photos, right?”

With Guardians, Marvel Studios took a gamble on an obscure comic full of seriously odd characters, but by now we know that if any studio can take a gamble and turn it into a super-enjoyable, mega-popular blockbuster – it’s Marvel. The resulting film is more fun than anything they’ve done before (which is quite a bold claim when you consider how hilarious The Avengers is in parts) yet it takes itself just seriously enough to not fall into  parody territory. Quite the balancing act.

… And that’s how Matthew Mcconaughey lost his favourite beach ball to a black hole.

Still reeling from the brilliance of 2013’s Gravity, I wasn’t expecting to be thoroughly won over by another space film in 2014, but that’s exactly what happened with Christopher Nolan’s Interstellar. It’s an unashamedly ambitious epic, but when comparing it to Nolan’s other mind-bender (Inception) both the science and the human emotions are far more convincing. Much of the film takes place in the far reaches of the universe, yet it somehow still felt grounded (pardon the pun) … well, at least it did until a certain point near the end. Truth be told, it lost me a little at that point but I’m giving it a spot in my top 5 without hesitation, so I guess all is (mostly) forgiven.

DA Says: When I wasn’t being bombarded with ridiculous pseudoscience I was being bludgeoned over the head with sickly sweet sappiness.

“Oi! Why don’t you walk AROUND the snow, you jackass!?”

I have an odd kind of fan-relationship with the Coen brothers. My reactions to their films span the entire range; they’ve made some of my all-time favourites (Big Lebowski), some that I didn’t enjoy (A Serious Man), some that I thought were highly under-rated (The Hudsucker Proxy), and others where I just didn’t believe the hype (No Country for Old Men). Yet, despite the inconsistency, every time they bring out something new I get excited – because sometimes it’s going to be a film as good as Inside Llewyn Davis. Davis is their most surreal film since Barton Fink (1991) and their most melancholy since … ever … but it’s also funny and beautiful, despite being centred around a character who is often more repulsive than sympathetic.

“Once upon a time there was a princess who did some stuff. The end. Now go to sleep, for chrissakes!”

Idea: shoot scenes with the same cast every year for 12 years, then put it together into a feature film that shows a child growing up. It’s a great idea, so the fact that we haven’t seen it before means that either no one thought of it, or movie-makers just weren’t interested in making such a long commitment. But that’s a good thing, for what could have been a shallow film-experiment in the hands of a lesser director, was turned into a fascinating, poignant experience by Richard Linklater (now the certified master of slice-of-life filmmaking).

DA Says: A long, long movie about nothing where nothing happens.

“Well, you see, just before the Little Miss Sunshine contest I faked my own death and run away to Hungary …”

Wes Anderson releases a movie every couple of years, and every couple of years I inevitably pick it as one of my favourites. This may make me the definition of a hipster, but what else can I do when he keeps making quality material like this? Anderson has a lot of recurring elements in his work, so the danger is that he’ll start making the same movie over and over. Yet, to my mind, he always manages to give his formula enough of a twist that it feels fresh. Grand Budapest sees him moving out of his comfort zone (at least in terms of the plot) as we’ve never seen him tackle nested storylines and themes of war before. He does so on his own terms, and the results are astounding.

1. The Wolf of Wall Street

The community marching band had to make drastic budget cuts. The uniforms were the first to go.

Like A Clockwork Orange or Taxi Driver, Wolf of Wall Street is a film about rather awful people that refuses to tell the audience just how they should feel about the characters. For me, there were genuinely disturbing and frightening scenes that gave me plenty to think about, yet it’s hard to deny that there was something thrilling about being taken for such a masterful ride through that world of debauchery, excess and moral bankruptcy. It’s a little worrying that some people are bound to watch it and see only the alluring gloss of such a life, but if we only made films about the world’s most upstanding citizens, the cinema would one of the most boring places in the world. But anyway, if you can get past such ethical dilemmas, the fact remains that Wolf is hilarious – and in the end that may be what matters most.

DA Says: A long, pointless glamourisation of greed that will guarantee a massive payday for a man who ruined countless lives.

Just a few on the ones I DIDN’T see: Whiplash, Edge of Tomorrow, The Babadook, Dawn of the Planet of the Apes, Nebraska, Dallas Buyers Club, Mr Turner…

Worst Movie (that I saw): Maleficent

“Shh. Don’t tell everyone how crappy my movie is”

Maleficent (from Sleeping Beauty) was arguably the most truly evil character in all of Disney’s animated films. This is a character that, at one point, screams at Prince Charming that he will have to deal with her and “all the powers of Hell”. So Maleficent could have been a fascinating example of Disney embracing their dark side, but instead, it is so spineless that it’s almost offensive. Plus, the effects are sub-par, the acting is ordinary, and the love story is about as convincing as a 80-year-old woman trying to get into a theme park for a children’s ticket price. Do avoid.

So, what did you think was the best movie of 2014? Please comment below and let me know!